May 19, 2018 Stella Evans
The Connecticut Republican Convention took place last week, and after three rounds of voting and a contentious final tally, Danbury Mayor Mark Boughton emerged as the party’s endorsed candidate. This is Boughton’s third attempt at his party’s endorsement, after falling short in 2010 and 2014.
Bethel was represented by a 6-member delegation, which included Tim Beeble, A.J. Bernard, Thomas Burke, Linda Curtis, James L’hernault, and Fran Pulle. 5th District State Representative Will Duff participated as a super delegate. Beeble explained that the number of delegates a town committee sends is proportionate to the number of votes cast by the town for the Republican nominee for governor in the last election.

Beeble explained that the third round of voting was very close between Boughton and Herbst. Obsitnik’s delegates switched to one of the remaining two candidates, and some of Boughton’s and Herbst’s delegates switched back and forth. Eventually Senator Toni Boucher, Convention Secretary, called upon town delegations to report their vote tallies by Congressional district, at the end of which Boughton had over 50% of the vote. When Boucher called for a motion to close the balloting, Herbst supporters voiced their desire for another opportunity to switch votes. Boucher continued with her motion, but unable to record an accurate voice vote due to the large number of people in the room, Boucher ordered everyone except the delegates and the media to vacate the convention hall. Boucher then asked those in favor of closing the balloting to stand and be counted. The majority voted in favor of the motion, which was in accordance with the convention rules. Boughton thus secured the Republican endorsement.

Will Boughton become the party’s candidate? It depends on whether any other candidate chooses to compete in the August 14 Republican primary. In all likelihood, some of his opponents will file the paperwork to trigger a primary. Anyone who garnered at least 15% of the convention vote is automatically qualified to participate in the primary, and any other candidate who receives enough signatures (approximately 8,000) and petitions the Secretary of the State may also participate.

To sum up the convention experience, Beeble said, “Republicans were fortunate to have many good candidates for governor this year. We supported Boughton. We have known him a long time. He was very successful in last election for mayor. He’s been the Mayor of Danbury for 14 years and a state representative before that. so he has lots of experience. He has been very good at holding down taxes and governing Danbury, which is one of the fastest growing cities population-wise in the state.” 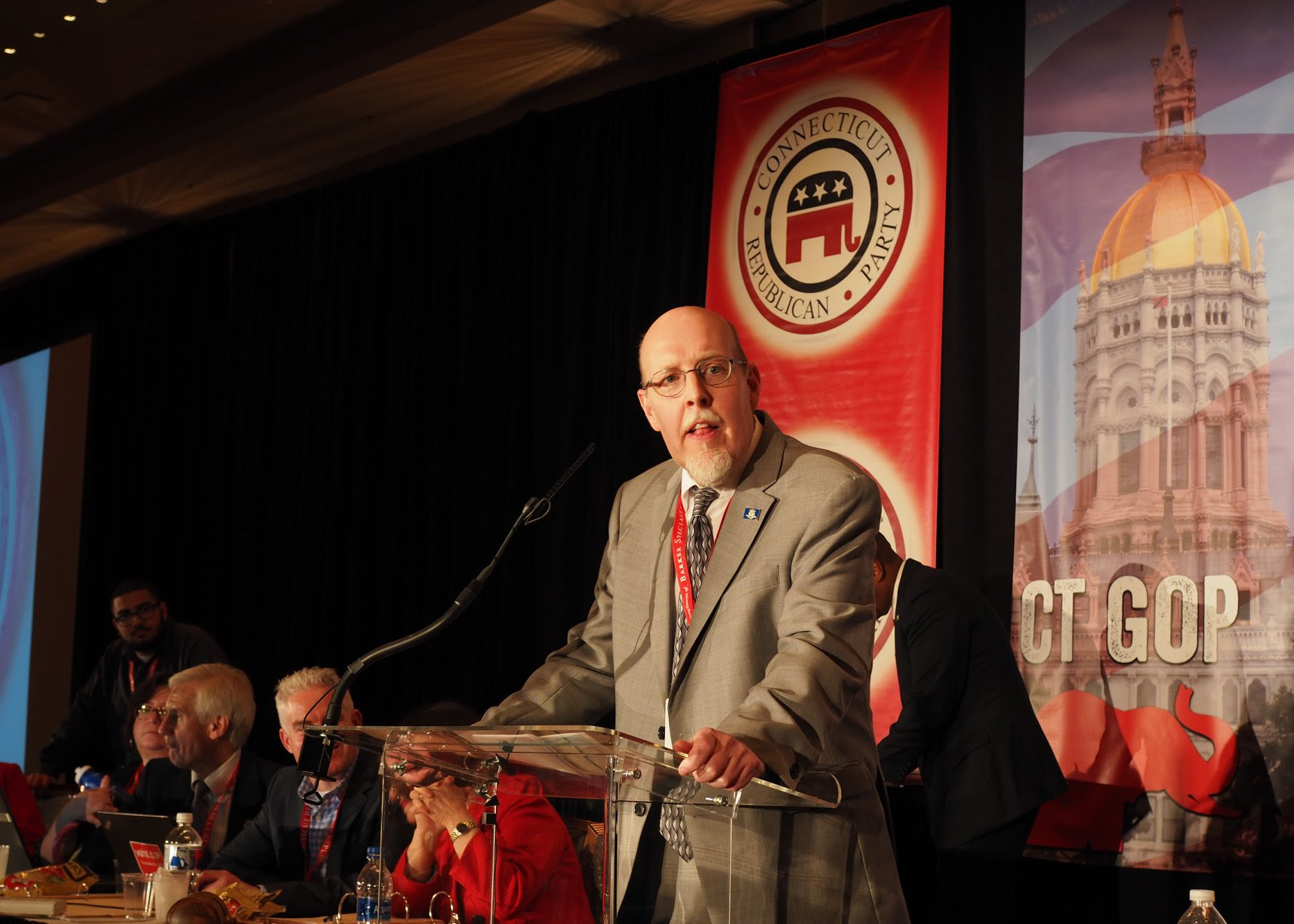 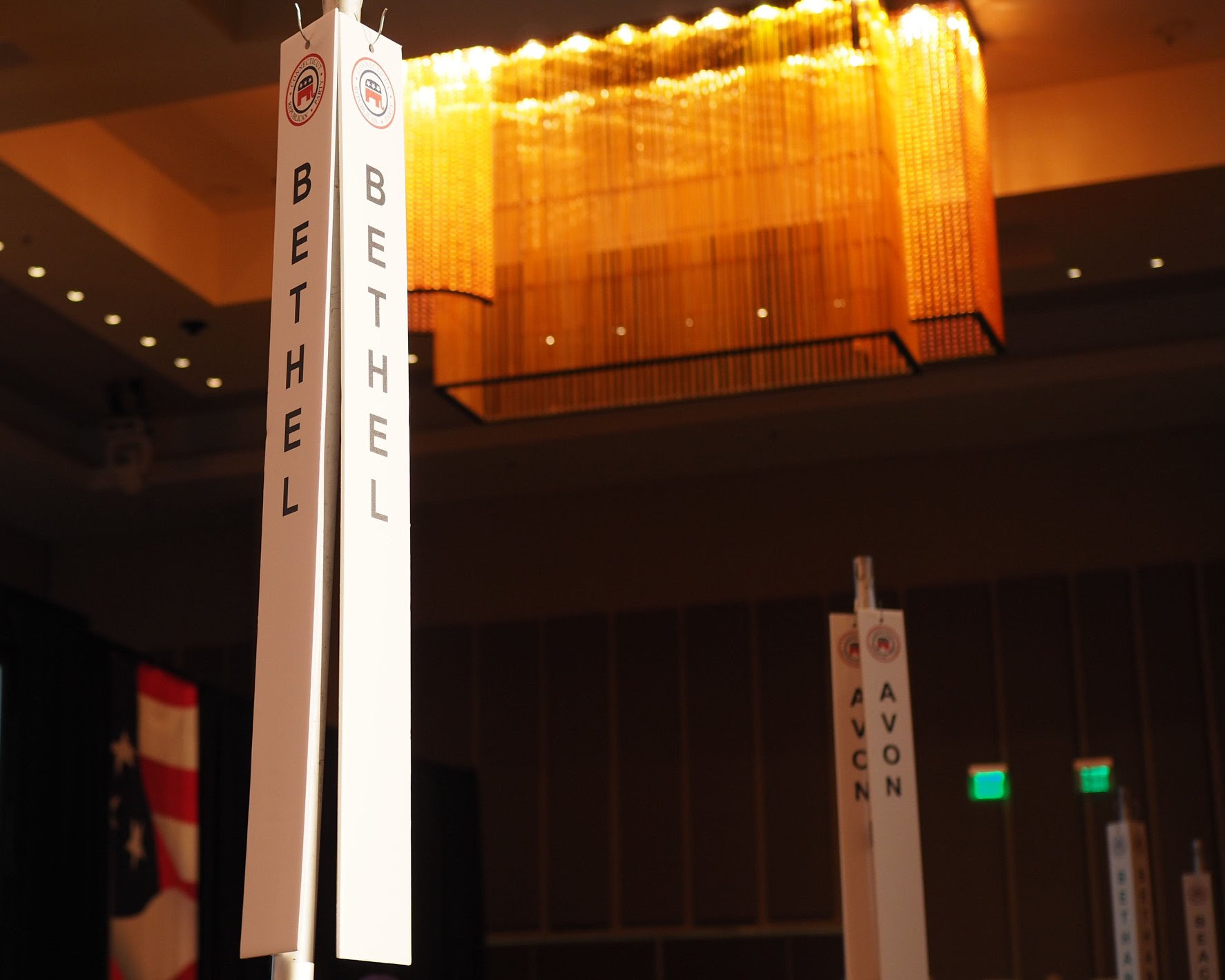 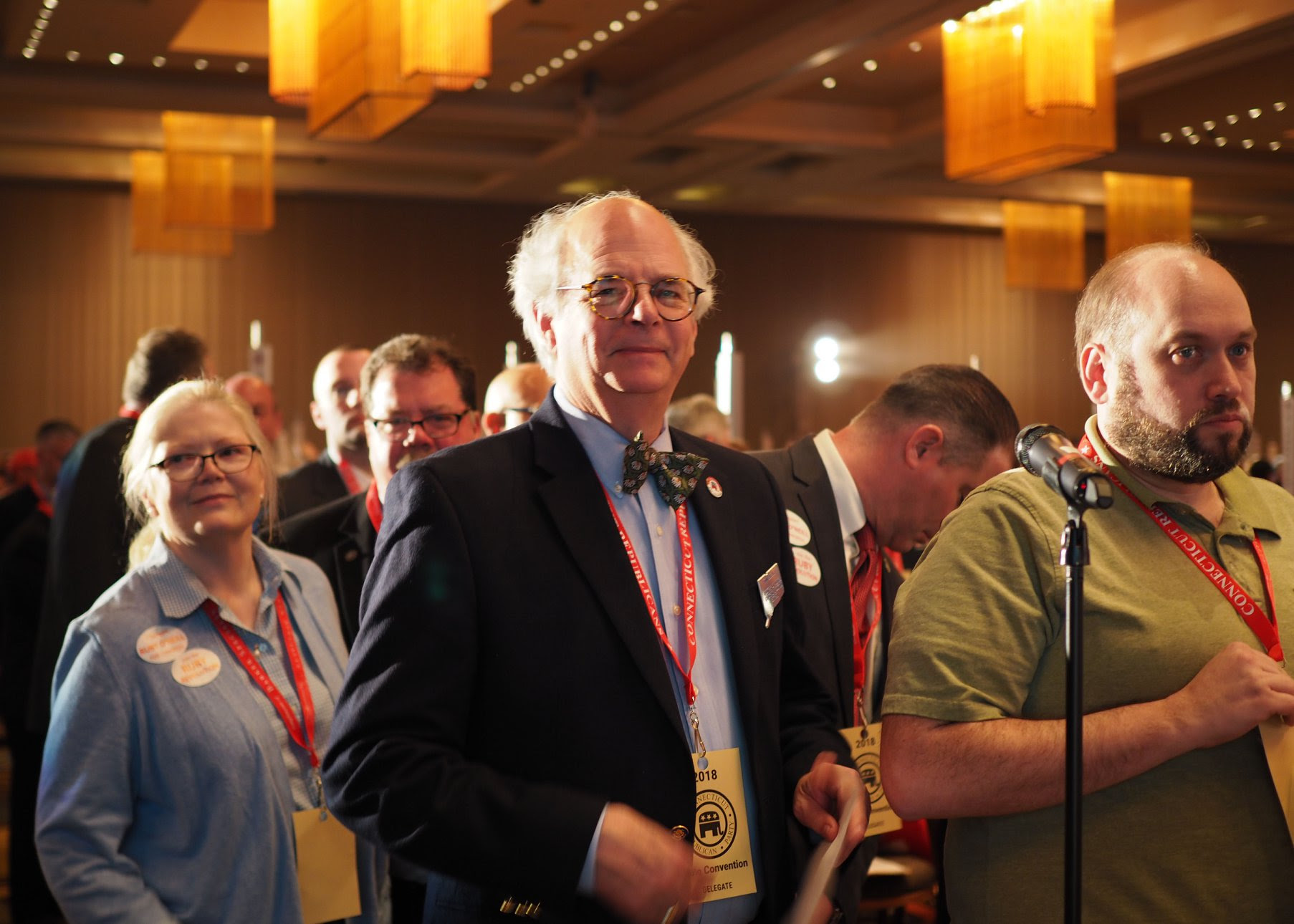 L: The Bethel delegation’s sign
R: Tim Beeble, queuing up to cast Bethel’s votes
May 19, 2018 Stella Evans
In the second round of voting, Bethel’s voters approved the remaining two budgets for Fiscal Year 2019. The $29 million town operating budget passed 1,168 to 1,051 votes, and the Capital Plan passed 1,295 to 871 votes. Approximately 18% of registered voters took part in the referendum.

For First Selectman Matt Knickerbocker, the success of the May 10 referendum was great news. “This is a fundamentally different kind of budget,” Knickerbocker said. He explained that the Board of Finance recognized that now was the time to move a few of Bethel’s many capital needs to the town’s operating budget. In doing so, the town will avoid generating short-term debt, which has an interest rate that is ticking upward.

“A few years back,” Knickerbocker said, “interest rates were so low that it was almost free money. It made perfect sense to borrow money. Now, that is not the case. Fortunately, we have strong revenue streams coming in from new construction.”

Board of Finance member Bryan Terzian had a different view of how this year’s budget could have helped Bethel’s taxpayers. “I felt like we could have done a better job lowering the mill rate. What are we going to do in a year when growth is less?” Terzian asked. “I feel we need to watch our spending before we get to a mill rate that’s not acceptable to voters.” Nonetheless, Terzian is pleased that Bethel has a budget in place for the next fiscal year. “I totally respect the process. Voters had their say at the end of the day. The democratic process is alive and well.”

Chairman of the Board of Finance Bob Manfreda is grateful for the support of the budget in last week’s referendum. Manfreda explained that this year’s budget is part of a long-term plan to position Bethel to take on the police station and school construction loans in a financially responsible way. “[This budget] is creating debt capacity. We’re doing things in the right sequence to minimize impact.” Manfreda summed up budget season succinctly, stating, “I’m very happy. It’s a good budget.” The Fiscal Year 2018-2019 budget takes effect July 1.