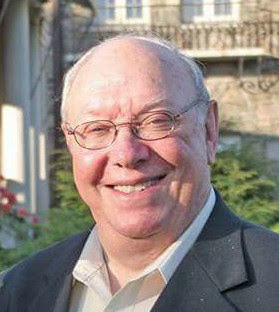 Arthur was born April 15, 1936 in the Bronx to the late Ethel and Abraham Blumenfield. He was the beloved husband of Hermine.

Arthur is survived by his children, Amy and Barry (Jodi) Blumenfield and Mitchell, Amy, Eric (Kim), Seth (Teri), and Deborah Eisenberg, and his grandchildren Robert Jeffrey, Emily and May Blumenfield, Samantha, Rachel and Emma Eisenberg, Elyssa, Kari, and Steven Eisenberg, and Ethan and Mira Eisenberg.

Friends are invited to attend his funeral on Friday, April 27 at 3 pm at the Abraham L. Green and Son Funeral Home, 88 Beach Road, Fairfield, CT. Burial will be at B’nai Israel Cemetery in Monroe. Donations to United Cerebral Palsy, ucpect.org/ways-to-help-ucp/make-a-donation/.

Arthur was an award-winning direct marketer for over 50 years. After graduating from City College, he got his start pioneering computer technology at Standard Oil. He invented “Me Books” and innovated de-duplication of mailing list technology.

His most treasured occupation, however, was that of Husband, Father, and Grandfather. From driving across state lines to hiking Mount Masada, he stopped at nothing to support his family. He made everyone smile by handing out “million dollar bills,” which gave him his famous aliases, King Arthur and Million Dollar Grandpa. He was able to afford this because he was priceless: constantly sporting an ear-to-ear grin and singing his favorite show tunes.

The Easton Public Library is seeking teen volunteers in rising 7th to 12th grade, to help out in the Youth Services Department this summer. Teen volunteering duties include (but are not limited to) helping with the children’s summer reading program and assisting patrons using the Innovation Space.

The online application (www.eastonlibrary.org/volunteers) will be open from 4/30-5/28. Interested volunteers must fill out an application at and attend an orientation, even if they have volunteered before. Volunteers must be comfortable working with kids, and will be needed for shifts in the Library from 6/25- 8/24.  Please note it is not necessary to work the whole summer.

America is going to choose its favorite book, and the Easton Public Library is going to be a part of it. Throughout the summer, in conjunction with the PBS series The Great American Read, Americans will have the opportunity to read any or all of 100 adult and young adult books and vote for their favorite.  The list will include 100 fictional titles spanning different themes such as Love, Heroes, Villains, Other Worlds, and What It Means To Be An American. Easton Public Library will have the list of books as well as a copy of each book for patrons to borrow. Once the patrons have voted, the Library will submit the results to PBS, which will then be added to all the other votes from around the country. This will be the first ever national vote on America’s favorite book.

The Great American Read is a television and online series from PBS that was designed to start a conversation about the benefits and joys of reading, and the ways books have impacted our lives. The series kicks off on May 22nd, at 8:00 p.m., with Meredith Vieira as the host. After the first episode, the show will resume in the fall, with celebrities, athletes, experts, authors, and everyday Americans talking about their favorite books. Voting will start on May 22nd with the launch episode, and continue through the fall.

The Easton Public Library will be hosting several events to tie in with the Great American Read initiative, including a One Book/One Town Community Read program, an author panel, and an open mic night for teens. 50 libraries across America will receive a grant from PBS that will provide added support for programming and materials needed to implement this program.

For more information, contact Lynn Zaffino at 203-261-0134 or via email at lzaffino@eastonlibrary.org.